Fever Nest - The Mooneyed And Paralyzed 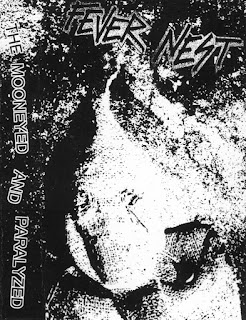 For fans of recent Caligari Records signings, Human Bodies and the killer Mahtowa Death March tape, here is some absolutely evil punk-influenced black metal from my old hometown of Columbus, Ohio. This tape is seventeen minutes of pure hatred and aggression, courtesy of ex-Mouth Of The Architect guitarist, Gregory Lahm. I have to be honest, I've had this tape in my possession for a while now, but it's only been the last several days, coming home (with a more than a little whiskey in me) from a particularly stressful run of dealing with the general public that this album has begun to sink in. This is absolute and complete narcissistic bitterness and contempt for everything that goes on two legs. I'm reminded of a quote, which I'll paraphrase and I'm sure I'll butcher here due to the aforementioned whiskey - "I've never killed a man, but I have read many obituaries with a great deal of pleasure." Yeah. This music is kinda like that. 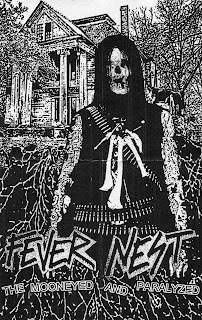