With The End In Mind - Thresholder 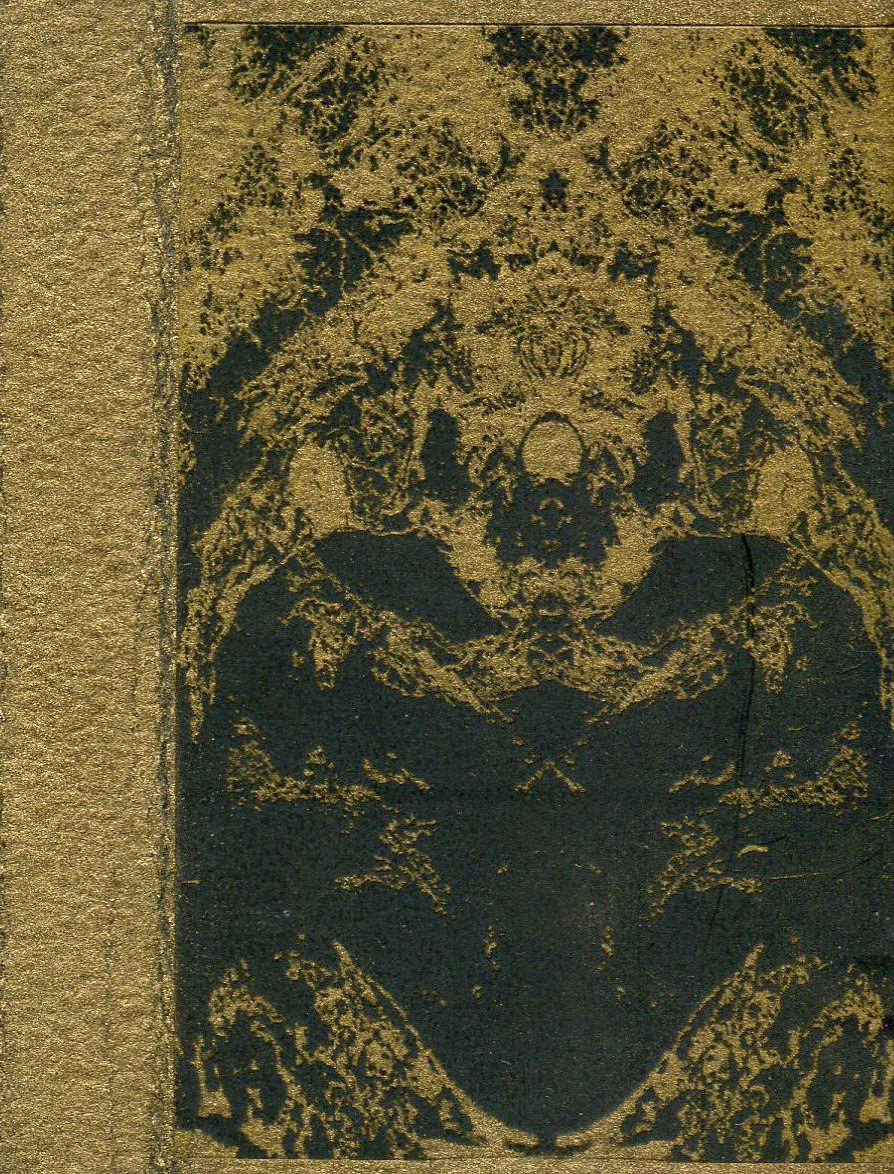 I discovered With The End In Mind while recently browsing Bandcamp's usually disappointing round-up of recommended metal releases and was immediately and pleasantly surprised. The title track, 'Thresholder,' inevitably invites comparisons to Diadem Of Twelve Stars (if not outright worship of), with it's slow-building, post rock, instrumental beginning and reverential, nature-worshiping lyrics, all the way to the lovely female fronted vocals chanted towards the ending of the song. The difference, however, between With The End In Mind and other bands of this ilk is that, although they wear their influences proudly on their sleeve, they also know how to compose an extremely strong song, not just rehash the same old ingredients from Wolves' classic debut full-length, and sole member Alex F is a more than competent enough musician to pull it off. Track two, 'The Pantheon Arches In All Directions,' is a beautiful, atmospheric instrumental that fades into the ending of 'Thresholder' and prepares us for the tour-de-force that is the album's final track, 'True Weight of the Things We Must Carry.' This track starts heavy and stays heavy throughout most of the duration of its almost nine minute run-time, even incorporating some doom-styled vocals as opposed to just the standard black metal shrieks, leading into a highly cathartic tremolo-picked build-up that is, to me, the highlight of the whole EP. Besides being just a lovely album, those who opt for the physical cassette are treated to a lovingly hand painted gold cardstock insert, as well as a live recording of a solo performance in the band's home town of Olympia, Washington and a personalized note with hand-drawn sigil. Definitely a band to keep an eye on. Hail Cascadia! 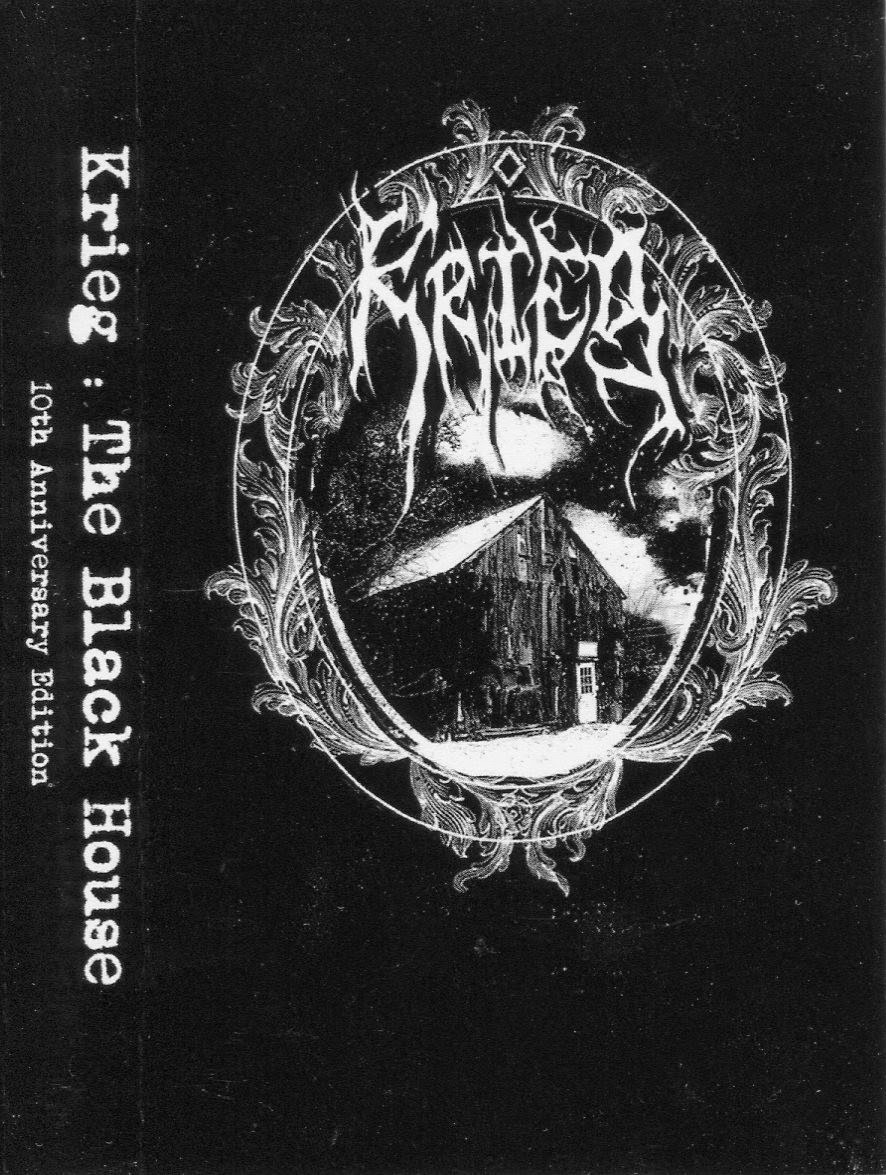 Originally recorded in Germany in 2003, Krieg's third and arguably finest artistic statement, and one of USBM's early defining underground treasures, The Black House, has recently been unearthed and reissued by Coeur d'Alene, Idaho mainstays Sol Y Nieve in honor of the masterpiece's 10th anniversary. Much has been written (both by journalists and N. Jameson himself) about the psychological dream-issues addressed in this album, and even more so his unusual but very much welcomed choice to include a Velvet Underground cover, namely Venus In Furs, on the recording. As with all Sol Y Nieve releases, the physical artifact is nothing short of beautiful, containing a lovingly created "black c46 cassette with white ink in a traditional plastic case with a 4 panel j-card and a 1 panel insert, all housed in a label-crafted, screen printed, black drawstring bag," and, as far as I can tell, an extra song that's not on my well-worn vinyl copy. Whew. Definitely the deluxe treatment. This being such an intensely personal release, I thought I'd end this reconsideration with a few words from the musician himself: 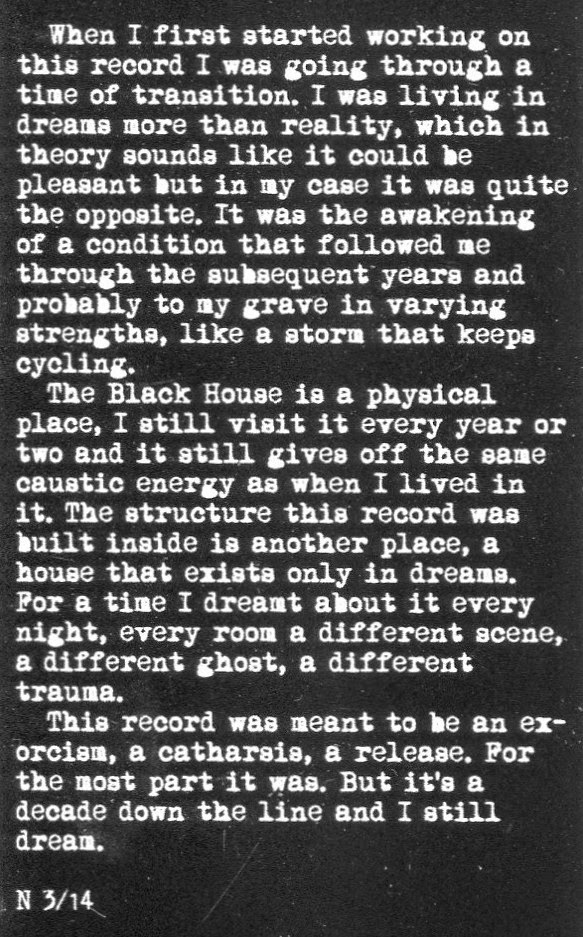 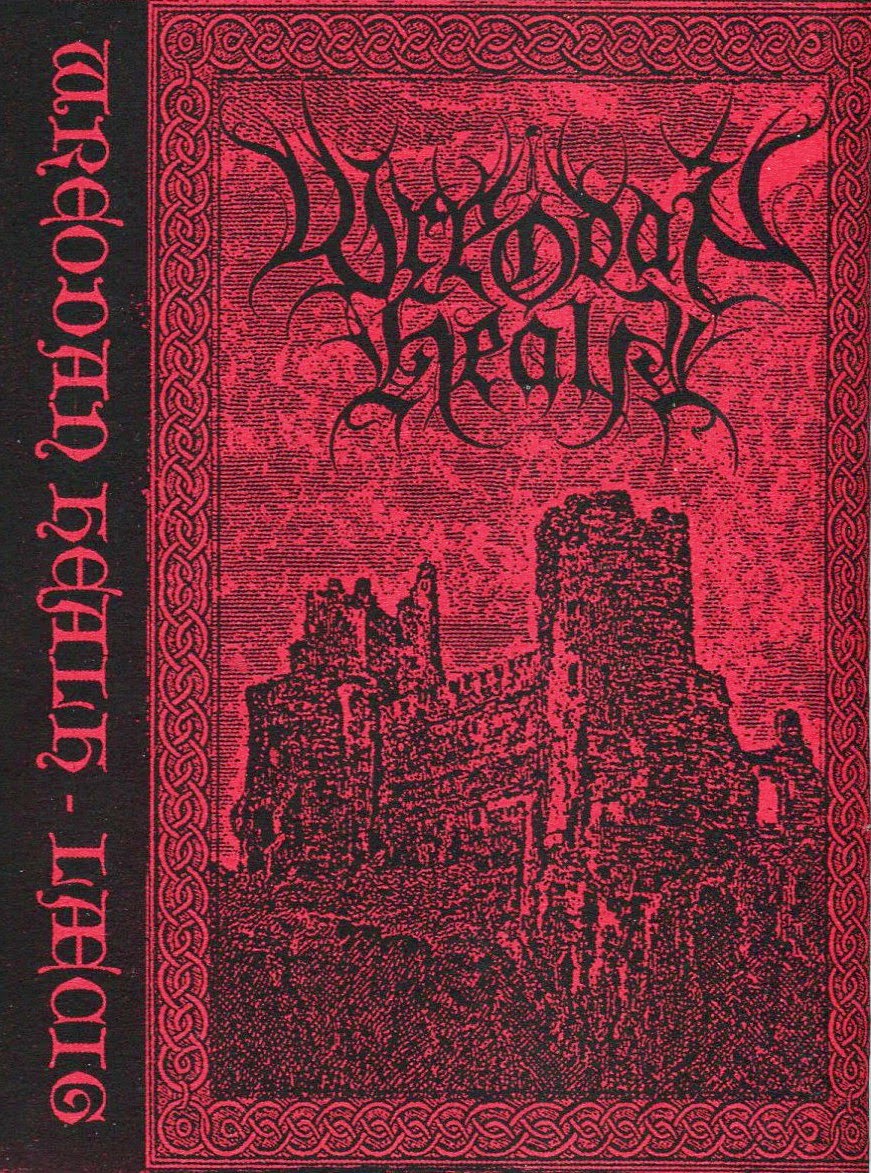 If you've been yearning for the days when symphonic black metal was more than just a laughable byword to be snubbed by the "true elite warriors" sequestered in basements worldwide, Wreodan Healh, a new horde from Rednal, England, just might become your new favorite artist. This outstanding introductory demo contains three tracks (intro included) and approximately eleven concise minutes of swelling melodies and vintage early 90's aesthetics that makes a convincing argument to reach for this and not your scratched, dusty copy of For All Tid. Distributed by the unassailable Exitium Productions and also available stateside via up-and-coming cult (and Clothbodies' favorite) Fettered Redwoods, this release, while neither groundbreaking nor experimental, comes nonetheless highly recommended to all true worshipers of the black flame. Bonus points for containing a Tim Curry monologue taken straight from Ridley Scott's fantasy masterpiece, Legend. 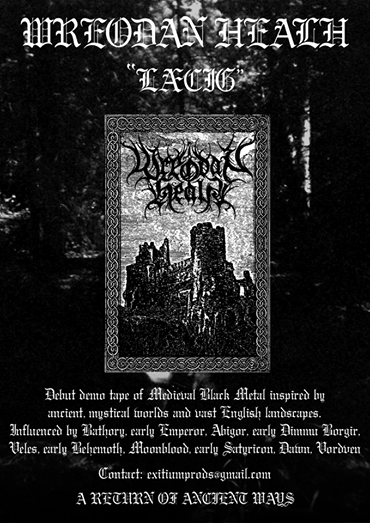 "Inspired by the dark forests of Albion and the black mysticism of ancient times..." 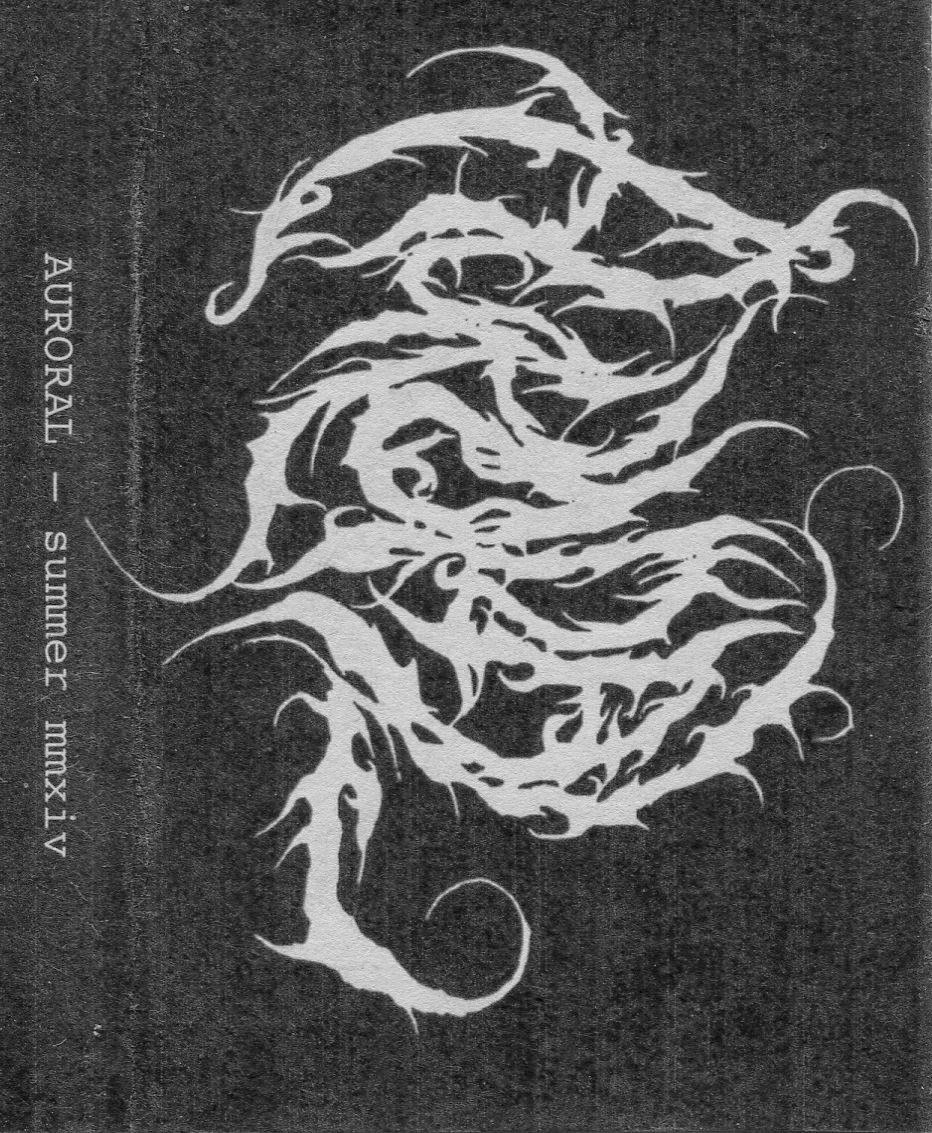 It is with great pleasure that I announce the formation of the Void Journeys' family, and more specifically, new recording project Auroral. It's time for a long-overdue run-through of the amazing new(ish) rehearsal tape from this brand-new black metal two-piece. While both sides of the tape contain versions of the same two songs, it's extremely interesting to hear how the pieces developed over the notably short time (actually just a few days) between the first two rehearsal recordings on Side-A, and my personal favorite, the relatively well-recorded live takes on Side-B, which round out the group with the addition of a live bass player. Both songs are long-form cascadian sounding exercises in high atmosphere as well as emotion, and while there are no vocals on either take, the tremolo picked guitars speak clearly enough for themselves, weaving in and out of the simple but highly effective drumming, as well as the purportedly unrehearsed but decidedly adept bass guitar. Unfortunately, it's possible that this amazing document may be our last exposure to Auroral, as both members are in a number of other time-consuming projects. 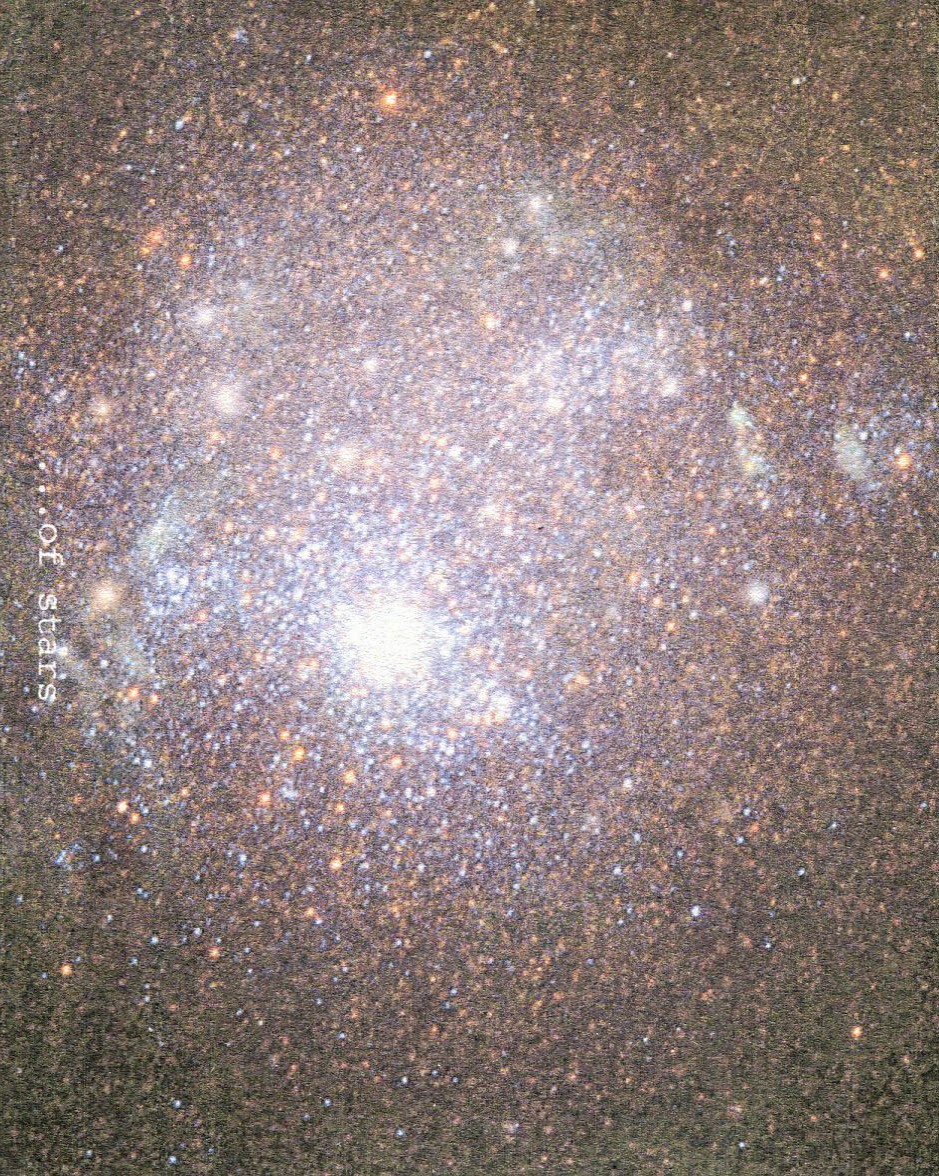 One of which is also a Clothbodies endorsed Void Journeys' release I've been enjoying quite a bit lately, realized by the guitarist of Auroral, called ...Of Stars. Compared to Auroral, ... Of Stars is another beast completely. Self-described as 'Acoustic Night Worship' by the musician in question, I don't think I could have said it any better myself. Four songs of beautifully raw acoustic guitar playing recorded outdoors after nightfall on an evening in 2013. These two recordings work almost in tandem; ...Of Stars being the palate cleansing come-down to Auroral's tempestuous black metal attack. As these were both pressed in relatively low quantities, I'm not sure if the beautiful, DIY physical versions are still available, but I highly recommend getting in contact with Void Journeys ASAP to secure a copy if at all possible. If not, Clothbodies has digital files of Auroral's demo up for your enjoyment through mutual agreement with the band (and digital files of ...Of Stars forthcoming shortly). Reminiscent of several early Woodsmoke recordings in terms of feeling as well as fidelity and execution (especially Leech), these songs deserve to be heard by as many fans of atmospheric black metal as possible, and not lost in the deluge of internet obscurity - Fullest Possible Recommendation.